Today I started over, looking more in-depth to a curriculum Lauren showed me online. I originally dismissed it because it had themes like “apples” and just had way too much stuff relating to apples. Seemed kinda pointless to me, but after the stuff from yesterday, I think that stuff is too old for him. The apples are about the process — not that we need to ingrain apples themselves into his brain.

So now I’m working on creating my own curriculum from this huge online packet. Since I didn’t have it ready for today, we did a mini-field trip to the library where they were having a little music class “Drumming the Beat: Join our drum and music circle as local teacher Wendy Campagna leads us in an African music and culture experience!” So for thirty minutes he banged on a drum and other little things attempting rhythm but mostly just banging. Then I took him to the playground.

We did a tiny bit of work on a website I subscribe to, ABCmouse.com where he learned to trace the number 1 and we sang the Letter A song. 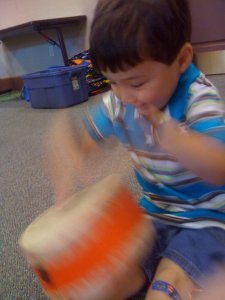 Today’s “school day” went great! We started the day with art class down in Marietta. They read a story and then created a watercolor project based on the story. It was a good class, but not sure if I want to go again just because it’s a 45min drive each way. Why can’t Cherokee have cool stuff like Cobb? Lucas was more open to doing school stuff today, and we got through all the planned activities plus an extra because he asked to do more when I said we were all done. I didn’t pay attention to the time, but we spent around an hour or so on all the stuff we did.

[Lesson] The new lesson of week is “A is for Apple” where we learn A, red, and #1 using apple themes. I guess this was more appropriate material. We started by reading a story about a little boy looking for a house with no doors, no windows, and a star inside. It was a riddle for an apple. Reading the story first (Lucas loves reading books) helped settle and focus him.

Next we did a science experiment to learn if an apple would sink or float when dropped in the water and recorded our results by gluing a little paper apple onto a picture of a bucket of water. I had him bob for the apple to take it back out of the bucket. He couldn’t get it so he used his hand to turn the stem up into his mouth and pulled it out by the stem.

He made an Aa out of red pipe cleaners and glued them onto a card. We will do a card letter project for each letter and then put them all together on the wall.

For math, I placed chocolate chips on apple cards and he had to count them as he ate them. (This activity makes more sense if you see the picture of the cards).

We took an activity break and went “shopping” for all the red items in the play room.

We did another science activity and learned the life cycle of an apple …seed -> plant -> tree -> flower -> fruit. I cut up our earlier apple and showed him the seed inside. Then we put the seed in a baggy in the window and ate the apple. Maybe it’ll grow, but I doubt it.

That was supposed to be our last activity for the day, but he wanted to do more, so I pulled out another math one. He rolled a die and then counted the dots to see what number it landed on. He had a worksheet of an apple tree with numbers 1-6 on the apples and a letter A stamp with red ink that he stamped on the apple with the corresponding number.

He was really enthusiastic about doing all the activities and seemed to have a good time doing them. I ordered a book,
The GIANT Encyclopedia of Preschool Activities for 3-Year Olds, so I can keep going with the preschool thing. 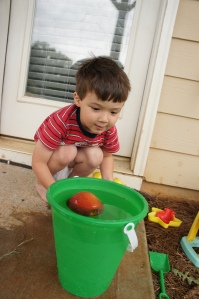 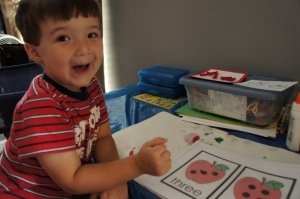 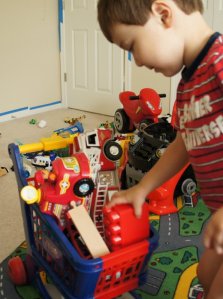 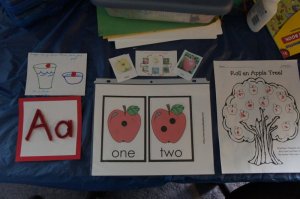 View all posts by allycat143

One thought on “Home Preschool, Days 2 and 3”