I’m starting to love Pinterest. When Lauren first told me to join, I didn’t find it that appealing. I was looking at the wrong stuff! My wall feed when I first log in of the stuff my friends had pinned was just not stuff I was interested in. Homemade house cleaners? I can’t even bring myself to CLEAN my house…you really think I’m going to take the time to make my own cleaners for it? Cooking recipes? Yeah, right.

Well a Facebook feed of something caught my attention and I went by my account to give it a look. And discovered the Kid’s Stuff. Now I can’t stop looking at activities to do with my kids. As usual, a lot of stuff mine are still too young to do (but I’m saving the ideas anyway for later), but there is tons of great stuff I’m finding we *can* do. And hey, I’m even saving some of those recipes onto my own board, titled “Food I’ll Never Actually Cook.”

Tonight I tried my first Pinterest inspired idea. The frozen yogurt dots. Prep time took literally 5 minutes and now they are in the freezer to harden. Mine don’t look as nice as in their picture…more like yogurt blobs than dots. Update: they took about 25-30 mins to freeze and are pretty good. I’m going to experiment with mixing them with other ingredients b4 freezing. 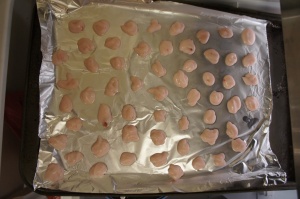 Another project I did today was one I made up on my own. Lucas helped every step of the way as we made a weather folder. First he used a hole punch and punched the holes alone the sides of a file folder. Then with yellow yarn he sewed the two sides together to make it into a folder pocket. Next he used my paper cutter to cut paper cards. I drew different weather pictures on each one: a sun, a rain cloud, wind, etc and he colored them in. Finally I cut the letters for “weather” out on my cricut and he glued them onto the front of the folder. The last step is I will take the cards to be laminated and then have him attach Velcro to the back of the cards and front of the envelope. We then take the folder outside and he looks at the sky and chooses the cards that match the weather for that day and attaches those cards to the front of the folder pocket with the Velcro. Today he chose blue skies and windy. He said it wasn’t sunny because he couldn’t see the sun (which was on the other side of the house). 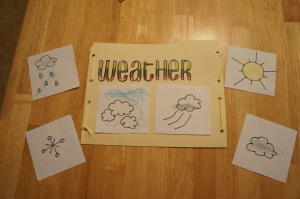 View all posts by allycat143